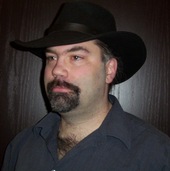 Photo by David Bird
Michael explores many themes, idioms, genres and even cultures in his work. He credits his studies at York University with opening his ears to many different influences which he has drawn on freely and in different ways at different times. He lists Indian music, Gamelan Music, medieval western musical theory and practice, Gustav Mahler, Iannis Xenakis and John Cage as his most powerful influences. Michael also frequently explores the collision of nature and technology in his music, both in the sounds he uses and the structures he employs. His frequent combination of acoustic and electronic musical instruments also reflects this theme. He has coined the term “electracoustmatic” to describe this combination of live, electronically processed and electronic sources in his work.

Michael completed his musical training in two stages: first at York University for his Bachelor of Fine Arts in Honours Music, and then at the University of Western Ontario for his Masters of Music in Composition. During this time, in addition to receiving the normal training in European Classical music, he studied composition and orchestration, and received exposure to Balinese, Indian, Japanese and Persian musical theory and aesthetics.

Michael’s many piano solos are published in various levels of the Northern Lights and Making Tracks series.

His works have been performed many ensembles across Canada, including Earshot Concerts, Oiseaux Exotiques, the Composers' Orchestra, the Sudbury Symphony Orchestra, the Ardeleana Trio, the Canadian Electronic Ensemble, and mmmmConcerts, and broadcast via CBC radio across Canada and parts of the USA.