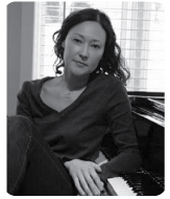 Jen Smith Lanthier began playing the piano at an early age and completed her ARCT in piano performance during high school.  At the University of Western Ontario she continued to study piano with Gwen Beamish, early keyboards with Dr. Sandra Mangsen, and music theory and composition.  Following graduation she completed an ARCT in piano pedagogy, and in 2012 received the Licentiate of the Royal Conservatory of Music (LRCM).

Since being back in the Grey-Bruce area of Ontario she has set up a small teaching studio, and has started composing again after staying home with her daughter Sofie.  You can also find her on the farm during apple season helping with the family business.

Jen teaches private piano and theory lessons in the Inglis Falls area of Owen Sound.  In her spare time she enjoys yoga, cooking, and spending time with family and friends.  She is continually exploring music composition and is having lots of fun doing it!