Norine is active as a piano and theory teacher, Music for Young Children teacher, festival adjudicator and accompanist, examiner with CNCM, pianist and accompanist at First Baptist Church Mount Forest, classroom music and recorder teacher at Arbor Glen Private School, accompanist with the Concertare Musical in Owen Sound, former president of Hanover-Walkerton ORMTA and the Georgetown Trinity Teacher's Association, and a former theory teacher with the Guelph Children's Singers.

She has continued studies with numerous pedagogues and was the recipient of The Georgetown Trinity Teacher's Award for highest achievements in theory and pianoforte, as well as the Cora B. Ahrens Award for excellence in Teacher's piano pedagogy.

Norine co-founded the Mount Forest and District Arts Council as well as The Mount Forest Festival of the Arts, and is musically active in her community.

Tenley Dyck is a prominent piano and pedagogy teacher in southwestern Manitoba. Her students have earned numerous scholarships and awards at local and provincial levels, as well as Silver Medals for obtaining the highest standing in CNCM and Royal Conservatory piano examinations. She is active as a piano examiner, adjudicator, accompanist and workshop clinician. Tenley holds a Licentiate in Piano Pedagogy with Canadian National Conservatory of Music and a Piano Teachers’ Associate Diploma with Royal Conservatory of Music.

Presently, Tenley is a member of the Examining Board for Northern Lights Canadian National Conservatory of Music, as well as the Academic Development committee. She is the provincial representative for CNCM in Manitoba, and is a member of the Manitoba Registered Music Teachers' Association. She serves on Festival committees at local and provincial levels. As Project Manager and Editor of CNCM’s publications, the Northern Lights – An Exploration of Canadian Piano Music and Making Tracks – An Expedition in Canadian Piano Music series, Tenley works with composers from across Canada for the promotion of educational Canadian piano music.

Wes Froese is a performer, composer, and music educator based in Saskatoon, Saskatchewan. He studied at the University of Regina with Bill Moore, and at the University of Saskatchewan with Robin Harrison. He also spent a year studying at the Hebrew University of Jerusalem in Israel. Wes is the former director of music at Horizon College and Seminary (PAOC); co-founder and original artistic director of Eclipse Chorus, a Saskatoon community choir; and developer of the educational series Starting With Blues.

Wes Froese performs solo pop and jazz shows regularly in and around Saskatoon, including Piano Fridays at the Bassment (Saskatoon Jazz Club). He also works in long-term care as a recreation coordinator, providing music for long term care residents. As a recording artist, Mr. Froese recorded a solo album in 2000 (pop Christian) and has also collaborated with other artists, recording and producing pop and country CDs, most recently in November 2019.

Wes is a prolific composer in a wide variety of styles. Contemporary harmonies, driving rhythms and reflective melodies permeate his music. A thorough knowledge of the blues/jazz genres coupled with appreciation of what students like to play, make his music very popular with students of all ages. His piano compositions can be found in Northern Lights Canadian National Conservatory of Music Northern Lights collections, in seven volumes of Pianozzazz (published by Debra Wanless), and in both volumes of Saskatchewan Registered Music Teachers’ From Prairie to Pine. Wes’ music is also used as the theme music for the CNCM YouTube channel.

At present, Wes operates a private piano studio in Saskatoon, specializing in training musicians to play by ear, read charts, improvise and compose. He teaches both virtually online, and traditionally, in person. He adjudicates for music festivals in western Canada and is an examiner for the Northern Lights Canadian National Conservatory of Music. Wes is known to many of the CNCM teachers and students through his work leading several ‘Summer Sizzle’ sessions. 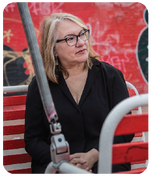 Sandra Mogensen has extensive pedagogical experience, both as a piano teacher and a coach for singers. Having taught piano internationally via Skype since 2012, she was well-positioned to continue her online teaching when the pandemic situation arose. A former senior member of the Royal Conservatory of Music Board of Examiners, Sandra is currently examining for Northern Lights Canadian National Conservatory of Music and Conservatory Canada. She enjoys adjudicating students of all ages and levels, as a way to support and encourage personal and musical development, while sharing her love for music.

As a performer, pianist Sandra Mogensen is equally at home in two worlds: performing as a solo pianist and co-performing with singers in recital. She has played in concert in both capacities in Canada, the United States, the United Kingdom, Denmark, Latvia, Iceland, Norway, Sweden, the Netherlands, and Austria.

In early 2019, Ms. Mogensen’s focus turned to the music of female composers. Her first recording in the series of six albums entitled en pleine lumière was released in December 2019, spotlighting composers born in mid-1800. Volume two (composers born 1870-1900) recording sessions have been postponed due to the pandemic. This series of six recordings is
of solo piano music by undeservedly overlooked women who composed, from the romantic era up to present day.

She has also co-founded a project called ‘Piano Music She Wrote’, in which all piano music on
International Music Score Library Project (imslp.org) composed by women has been catalogued in an online directory to thousands of pieces. The ‘Piano Music She Wrote’ YouTube channel features Sandra’s and her co-founder Erica Sipes’ performances of some of this music, with a repertoire that continues to expand weekly. Sandra has also recently released two elementary level Piano Music She Wrote anthologies for piano students, published by Debra Wanless. In addition, Sandra has created two directories for those interested in vocal repertoire composed by women: ‘Lieder She Wrote’ and ‘Mélodies She Wrote’.

Sandra’s first solo recording, Piano Music of Edvard Grieg, recorded in December 2006, was warmly received and praised. Since then, Sandra has become known as a specialist in Grieg’s music, having released four recordings of the great Norwegian composer’s music so far.

Sandra is excited about working with CNCM in her new role as Executive Co-Director.

Debra has served at the local and provincial levels of ORMTA, is the founder of the North Wellington Camerata Canada Music Week Festival and worked for many years as music secretary to the Midwestern Ontario Rotary Music Festival.

Debra's piano solos and ensembles have been selected for performance at festivals across Canada; for inclusion in the New Millennium, Contemporary Idioms, Northern Lights and Making Tracks Series, the Piano Now Syllabus, and reviewed in Clavier Magazine. Debra has edited, revised and written new material for the Leila Fletcher Piano Course (Mayfair/Montgomery Music), the James Lawless Theory Course (Waterloo Music) and arranges pop music for the ProMusic Company in California. Her most recent books/materials include two Rhythm Workbooks, Elementary Harmony and Melody Writing, Musical Signs and Terms Flashcards, Let's Begin, 101 Children's Pieces, A Jazzy Day, Midnight Jazz which includes a CD, Keyboard Harmony Books 1-3, Classy Piano Pieces, Boogie and Jazz Piano Styles, Groovin' and What a Wonderful World in Big Note and intermediate piano solos, intermediate Sacred Jazz Solos. and Matinee Jazz with CD. Debra's pedagogy materials and compositions are also used and performed in Australia, Brazil, China, England, Guam, Hong Kong, Israel, Japan, New Zealand, Singapore, Switzerland, Serbia and throughout North America. She is the recipient of the ORMTA Special Teacher Award, and the Commemorative Medal for the 125th Anniversary of the Confederation of Canada.

Administrative Coordinator
Having never strayed far from her rural roots in Midwestern Ontario, Ruth is happy to call Harriston, Ontario home.  After graduating from the University of Guelph and the Faculty of Education at the University of Western Ontario, she spent her elementary teaching career with the Bluewater District School Board.  Since retiring from the classroom in 2019, she has joined CNCM to provide administrative duties in the office.  She appreciates the opportunity to support the flexible grass-roots structure of the organization, believing that students of all ages can thrive as they explore and develop their musical appreciation, understanding and proficiency.