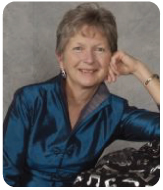 Joanne (Elligsen) Bender has been playing piano since the age of 7.  She grew up near Stratford and participated in the Stratford Kiwanis Music Festival.  Being part of a musical family gave Joanne plenty of experience performing as soloist and collaborative artist in school, community and church events.

At University of Waterloo from 1969-74, Joanne studied science in preparation for a teaching career. During this time she continued piano lessons privately with Erhard Schlenker in Kitchener.  She completed her ARCT in Piano Performance as well as her B.Sc. and M.Sc. degrees.  She was a frequent award winner at the KW Kiwanis Festival, a well-known pianist at U. of Waterloo, and appeared as soloist with the KW Junior Symphony conducted by Raffi Armenian.  In 1974 she studied piano privately in Vienna, Austria with Dieter Weber, a teacher in the Vienna Academy.  This was a life-changing experience for Joanne. Vienna, the city of music, became an inspiration to pursue a musical career.

Following her marriage to John Bender, and while raising their four children, Joanne expanded her piano teaching studio.  In order to strengthen her musical education, she did a B. Mus. degree at Wilfrid Laurier University in Waterloo and completed her M. Mus. at U. of Toronto in composition.  Her teachers included Glenn Buhr, Peter Hatch, Christos Hatzis, Gary Kulesha and Chan Ka Nin.

Joanne is passionate about music.  She is a full-time private teacher of piano, rudiments and composition in her Waterloo studio, with many talented students from beginners to advanced.  Her students are frequent award winners at local and provincial competitions.  She is involved in KW Kiwanis Music Festival, KW Symphony Love of Music Marathon, and KW ORMTA. She performs as a chamber musician in local concerts, and is a volunteer church musician.  Her compositions for piano appear in the RCM Piano Odyssey series and CNCM Northern Lights series. She has also composed children’s musicals, a chamber opera, a cantata and several piano trios. Joanne is a winner of the NUMUS composition competition, the John Weinzweig composition scholarship and the CFMTA Call for Compositions 2010.