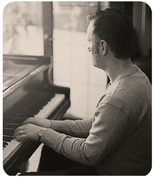 Jesse Brown is a Canadian piano teacher, performer, session musician, and composer with an eclectic history of work that dates back to 1991. Initially schooled by his mother as he grew up in the village of Albertville, Saskatchewan, Jesse carried on to be mentored by prairie pianists Martin Janovsky and Ron Paley.

​Jesse opened up his own teaching studio in Saskatoon, Saskatchewan in 2005 (Jesse Brown’s Musicscool) where he settled down with his wife and two sons. Jesse continues to inspire and be inspired by his students to compose and perform. As of 2015, Jesse Brown has released two full length solo piano albums (December, Heartwork).