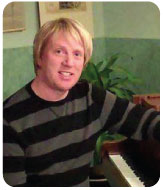 Andrew Harbridge, recipient of the Gold Medal of Excellence from Conservatory Canada, is a resident of Peterborough, Ontario. He has taught a large class in his music studio since 1989. Among his teachers are Mary Zilinski of Peterborough, Ontario (Piano and Theory), Daryl Irvine of Toronto, Ontario (Piano) and Sheila Tyrrell (Carter) of Peterborough, Ontario (Voice). Along with teaching piano, voice, theory and music history, Andrew is the music Director of Park Street Baptist Church in Peterborough. He has been the organist/choirmaster at numerous churches since 1982 and thoroughly enjoys performing at the keyboard and conducting choirs. Andrew has had many years of experience improvising and playing contemporary piano styles in modern worship settings since 1988.

Andrew has won numerous awards including the Cora B. Ahren’s Award, The Cultural achievement award presented by Mayor Sylvia Sutherland and the Peterborough City Council, and other prizes in competitions. He is also a composer with many piano pieces published by Wanless Music in the Pianozzazz Series, Novus Via in the Canadian Contemporary Repertoire Series, the New Millennium Series and in the Northern Lights Series. Almost all of Andrew’s graded compositions are approved for Conservatory Canada’s Contemporary Idioms Examinations.*

Andrew has published four of his own series of music books entitled Piano Styles, Spectrum and The Easiest Technique Book Ever! Series and the Contemporary Technique and Skills books (all of them with Wanless Music. Each piano repertoire book contains an inviting variety of music styles. They range from Rock, Latin, Blues, Modern Ballads, Neo-Classical, Neo-Romantic and others.

Presently, Andrew is an examiner for Conservatory Canada. He has been on the Board of Examiners since 2003.

Recently, (2018) Andrew’s compositions have been performed on the Carillon of the Peace Tower on Parliament Hill, Ottawa.
​
Music Education
Graduate of Conservatory Canada (formerly the Western Ontario Conservatory of Music established in 1891) with a diploma in piano pedagogy. Studies included piano, voice, harmony, counterpoint, piano pedagogy, and music history. Voice studies included many years of experience in all of the classical languages.

*Please note that Andrew's pieces are not written solely for the Conservatory Canada's Contemporary Idiom Program. You may use his music for a study substitute on an RCM examination, the supplementary piece on a ConCan Classical piano examination, or any where on a CNCM (Canadian National Conservatory of Music) examination.